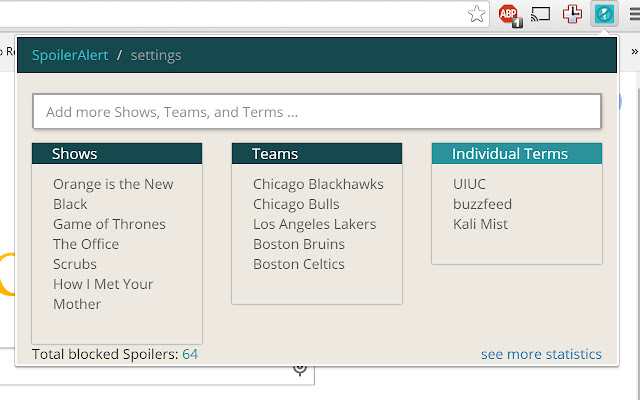 SpoilerAlert is a Google Chrome Extension that blocks potential tv show and sport spoilers from Facebook newsfeeds. Simply select the shows or sport’s teams that you follow in order to personalize the content that you would like filtered. Afterwards, when a reference to an entered term is found on Facebook, our app will blur that post, explain why the blocking occurred, and provide an option to remove the blocking.

With the explosion of television show internet streaming services like Netflix and Hulu the amount of people watching television shows online has skyrocketed. With viewers often turning to social media in reaction, it has become commonplace for Facebook or Twitter users to be exposed to information or results that they wish they would not have seen. Whether it is what happened in the latest episode of their favorite television show or the score of the sports game they recorded, having a show or game spoiled by friends on social media can be frustrating and often heartbreaking.

Now, with SpoilerAlert say goodbye to those unwanted posts! Just tell us what you follow and we’ll do the rest.