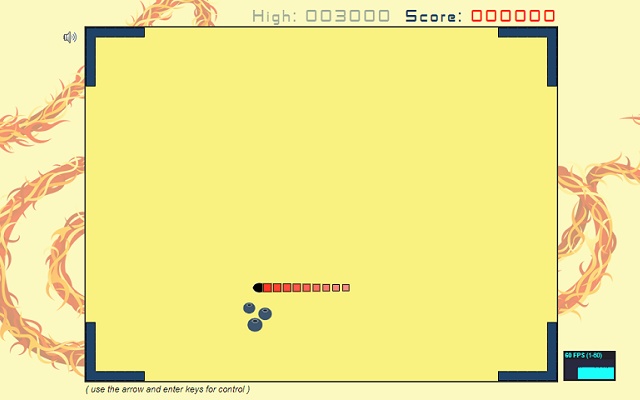 Eat as many fruits as you can, while your snake becoming longer and longer.

Choose speeds: normal, slow, fast and…. insane! Lets see you managing the insane speed! Other options to turn off the music.

The snake is controlled using the left and right arrow keys relative to the direction it is heading in. The snake increases in speed as it gets longer, and there’s only one life; one mistake means starting from the beginning.

PLEASE GIVE US 5 STARS! Support us for more cool games!

A bit of history!
Snake is the common name for a video game concept where the player maneuvers a line which grows in length, with the line itself being a primary obstacle. The concept originated in the 1976 arcade game Blockade, and the ease of implementing Snake has led to hundreds of versions (some of which have the word snake or worm in the title) for many platforms. After a variant was preloaded on Nokia mobile phones in 1998, there was a resurgence of interest in the snake concept as it found a larger audience. Now, you got it for Chrome!