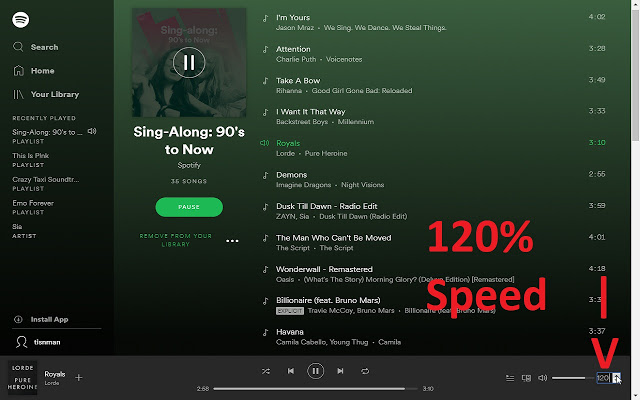 IMPORTANT: Refresh if it doesn’t show up!
The extension is open source so feel free to look at the heavily commented code on github here https://github.com/intOrfloat/spotitySpeedExtension

Version 1.6:
-Fix issue where speed input would sometimes not appear(race condition with loading dom)
-Fixed issue where free version of spotify would load too quickly and cause the extension to load after spotify’s scripts :’D btw ublock origin extension removes spotify ads

Version 1.4:
-Change speed from 7% to 1600% speed
-patch for spotify update that changed to a hidden

Mainly made this to share with friends but here you go. This was incredibly difficult to come up with a solution for. Many dead ends…

Features:
-can make songs nightcore or super slow
-Saves the speed
-Haven’t even tested it with the ad version of spotify #noqualitycontrol
-icons made in ms paint
-coded by an imbecile